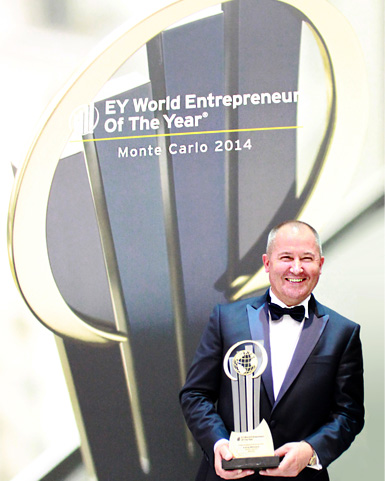 A country's success is decided by strong, recognisable companies and extraordinary entrepreneurs. Poland has a true ambassador in Andrzej Wiśniowski, creator and owner of the WIŚNIOWSKI brand, who represented our country in the prestigious final of the EY World Entrepreneur of the Year 2014. The Formal Ceremony was held on 7 June in Monaco's luxurious quarter - Monte Carlo.

Andrzej Wiśniowski, the man behind the WIŚNIOWSKI brand's success, is one the most valued Polish businessmen. In November last year, "in recognition of setting trends in the doors and fencing systems’ market for 20 years", he was awarded the honourable title of Entrepreneur of the Year 2013 in the 11th Polish edition of EY's competition. The international final of the EY World Entrepreneur of the Year 2014, bringing together winners of national competitions, was held on 7 June in Monte Carlo. The global capital of luxury, famous for the Formula 1 Grand Prix, the Rolex Masters tennis tournament and refined residences, was host to the commercial elite.

Last Saturday, during the EY World Entrepreneur of the Year 2014 Formal Ceremony, Andrzej Wiśniowski represented our country as the domestic business leader. The entrepreneur found himself in a group of the most outstanding businessmen from more than 50 countries. As a finalist, Andrzej Wiśniowski has joined the Hall of Fame of global business. - I'm very proud that I had the chance to represent Poland at this prestigious event when we celebrate the 25th anniversary of economic and political transformations that enabled free entrepreneurship. My company is a child of those transformations. This year we celebrate the 25th anniversary of its establishment - says Andrzej Wiśniowski.

Operating since 1989, the WIŚNIOWSKI company relies exclusively on Polish capital. Andrzej Wiśniowski created it from scratch. He efficiently built renown and prestige of the enterprise, and now he employs more than 1100 people and successfully competes with world-class companies. As much as 25% of the enterprise's revenue comes from sales on international markets. The company has gained the trust of customers from around the world; it develops constantly, setting new trends on the market and expanding its range to include new solutions. For 25 years, WIŚNIOWSKI has engaged in the manufacture of high quality garage and industrial doors, fence systems and steel and aluminium joinery, which are crown jewels of all investments.

World Entrepreneur of the Year is organised by EY as the international final of national "Entrepreneur of the Year" competitions in over 50 countries. The initiative promotes leaders of business. Due to its importance, it is commonly referred to as the World Business Oscars. The presentation of the awards was the finale of a five-day visit, during which the finalists had the opportunity to participate in workshops, discussion panels and plenary lectures which were attended by amongst others, Alex Ferguson - manager of Manchester United, Muhammad Yunus – founder of Grameen Bank, who received the Nobel Peace Prize in 2006, Martha Stewart – creator of Martha Stewart Living Omnimedia, Eric Wahl - blockbuster writer, entrepreneur and renowned international artist, and Hamdi Ulukaya – founder and director general of Chobani Inc., winner of last year's World Entrepreneur of the Year edition.